10 Things You May Not Know About Chickens 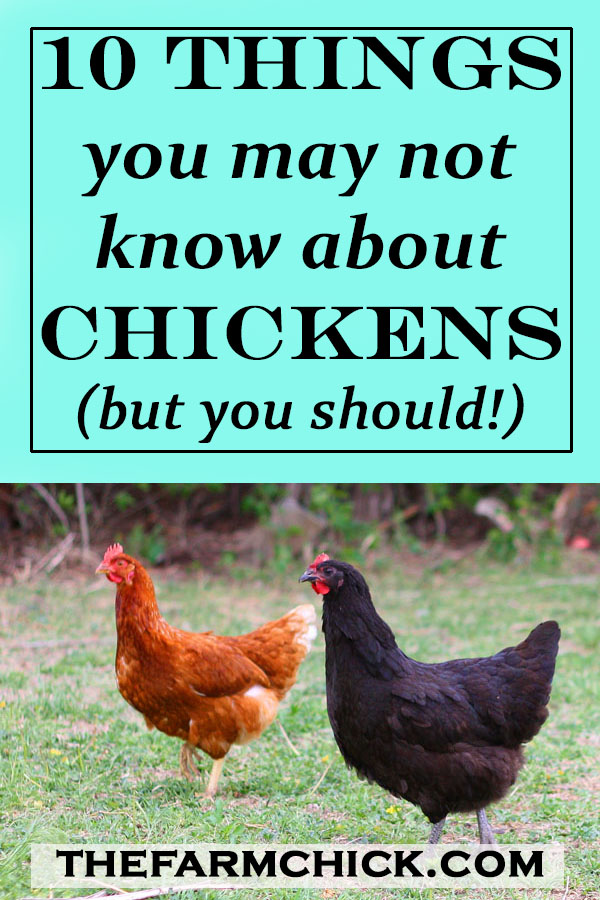 10 Things You May Not Know About Chickens

I call chickens the gateway drug to farm animals!

I grew up on a former chicken farm (my grandpa had the largest egg laying farm in the state of Kansas in the 1950’s and 1960’s!) and we always had chickens in one of the old chicken houses.  We all had chicken chores at one time or another during our childhood.

Yup! I was a not a chicken lover growing up!

But, guess what was the first thing I wanted to get after Jeff and I moved back to the family farm??

Over the years, I’ve learned a lot about this type of poultry and I’m going to tell you ten things that you may not know about chickens…

Wait, what?  Does that mean chickens eat meat?

Yes, folks, that’s exactly what it means!  In fact, chickens love meat, blood and everything else.  And it’s actually good for them!

I remember being surprised when I first learned this as an adult.  I mean, chicken feed is always made up of grain, so I just assumed that was the only thing they were suppose to eat.

Nope, if given the chance, chickens will eat meat 🙂 And they love it!

CHICKENS CAN BE CANNIBALS

On that same line of chickens being omnivores, they can also develop cannibalism and eat each other!

Yeah, probably not what every new chicken owner wants to here, right?

It’s important, though, for you to be aware of this possible tendency so that you can prevent it before it ever starts in your flock.

There are many possible causes of cannibalism.  A few of them include boredom (yeah, I’m not kidding), vitamin deficiencies, and pack syndrome (one chicken starts it for whatever reason and the rest of of the flock follows).

Now, I have never had this problem among my laying flock, but mine have always free ranged.  I have experienced this in my broilers before, though.

The best way to prevent this before it ever starts (because it is very difficult to stop your chickens once they get it in their heads) is to make sure that your chickens have plenty of space to roam (even if they are kept inside make sure they’ve got room to walk and scratch and dust bathe), always have enough to eat, and get to eat greens pretty much every day.

If you let your chickens free range, then you have already all of this for your flock and the chance of cannibalism is low!

Just a word of warning- the place that they will tend to peck on another chicken is the vent area under the tail.  They can literally peck all the way through it to the organs and kill the other chicken.  I actually had a case in my broilers where they were pecking the heads of the smaller, weaker chickens all the way to the brain!  Gross, right??

CHICKENS ONLY LAY ONE EGG A DAY

And, depending on your breed, they will lay most days of the year.  This means that if you have 50 chickens, then you could conceivably get 50 eggs a day!

I have known people that didn’t realize that chickens were so consistent.  They thought they could lay more than one egg a day or that they laid sporadically.  Yes, during the winter, egg production can decrease (more on that in a minute), but be aware that you can end up with a lot of eggs a day if you’re not careful, ha!

While some new chicken people may realize that egg production drops in the winter, what they don’t realize is that the cold temps don’t have anything to do with it!  It’s all about daylight hours.

A hen needs an 14 hours of light to be in her optimum egg producing cycle.  Egg production is all dependent on hormones, which are triggered by daylight.  Eggs are ultimately potential baby chicks, right?  Well, no hen wants to raise chicks in the dead of winter, so God designed her body to shut down or decrease egg production during the winter months by making her sensitive to light.  Pretty neat, huh?

Now, you can add light to your chicken house to “trick” them into laying more, but I don’t because I feel it is better for the health of the hen to follow the natural laws that God put in place for her 🙂

On another note, there are hardier breeds that will keep their egg production up in the winter.  My most favorite are McMurray’s Red Stars.

YOU DON’T NEED A ROOSTER FOR EGG PRODUCTION

I took this little fact for granted until a coworker of my husband’s made a comment one day about needing a rooster so the hens would lay eggs!

A hen’s body will produce eggs regardless if a rooster is part of the flock or not.  For many years, I had rooster-less flocks because I didn’t want to deal with potentially fertilized eggs, especially in the summer when our days get over a hundred degrees and a baby chick could start growing whether I wanted it to or not!

Several years ago, I started experimenting with hatching my own eggs and we’ve had roosters ever since.  Roosters  have their place, but you can have a lovely egg producing flock without them.

HENS ARE JUST AS NOISY AS ROOSTERS

Everybody has that picture in their head of the rooster crowing his heart out early in the morning and waking up everybody within a three mile radius, right?

Well, I’m here to tell you, that hens can be just as noisy as the roosters!

My roosters typically start crowing about an hour before the sun comes up, but once the hens are up and going, holy cow!  They love to announce that they’ve just laid an egg, they talk to each other, they yell at the cats, all sorts of stuff!

Sometimes, I think my hens may actually be noisier than their male counterparts 🙂

A CHICKEN’S WINGS ARE AMAZINGLY STRONG

While chickens can’t exactly fly (they can do an exaggerated jump), they do have super strong wings!  I know it has surprised both Jeff and I how much it can hurt your arms when you pick a chicken up by it’s legs and it’s wings flap and beat against you.

So, new owners, beware and try to contain the wings if you pick them up.

THEY PREFER TO ROOST AS HIGH AS POSSIBLE

In my childhood chicken house, we had a large wooden rack that sat on sawhorses for the chickens to roost on at night.

In my adulthood chicken houses, we’ve had all sorts of various roosting options.

Let me tell you, they will pick the highest one every time.

In fact, a problem with free range chickens is that a few may take it in their heads to start roosting in trees!  We’ve had chickens jump/fly from branch to branch and end up roosting 50 feet in the air.  Unfortunately, there’s not a lot we can do about it because chickens are difficult to catch when their outside free ranging and once they start settling down for the night, it’s usually impossible for any of us to climb the tree to get them out!

I have never had the entire flock start to do this, so I just let the few that prefer to roost way up the trees have their way and figure that not much will be able to get them that high in the air anyway.

While I do provide shelter for my flock, I don’t give them extra heat in the winter or keep them cooped up if it’s raining or snowing.

In fact, my chickens seem to love being out in the rain and snow doesn’t faze them.

Remember my chickens that roost in the trees?  Well, they even survived two ice storms up there!  Apparently, their feathers are perfectly sufficient in keeping them warm.

In other words, I would not try to give them a cushy chicken pad.  Let them be out in all kinds of weather- that’s how God made them!

On that note, we do not live in an icy tundra like some of you up north, so conditions may be different for you guys. Chime in and tell us how to keep chickens up north!

Now this little fact often surprises people the most!

If you let your chickens out every morning, they will find their way home every night.

I have chickens that range really far, but about an hour before sunset, everyone starts heading back to the chicken house and by the time it’s dark, everybody (except my rogue chickens that like the trees better!) is safely tucked into their roosting spot.

It’s pretty neat to see it and was something that I had no idea was possible when I was a kid!  Our chickens were kept in a chicken house all the time.  My first flock of free range hens (3 of them to be exact) was rather accidental (I didn’t have a good place to put them) and I was shocked to find that they came back to the carport every night to roost, no matter where I would see them during the day.

I will say this, if you move their house (we had a moveable chicken house for several years), you need to do it pretty often or they get attached to one geographical spot and they will bed down on the ground where their house used to be (ask me how I know this, lol!) and you will have to catch them all and put them back in their coop.

Currently, I use a stationary chicken coop, so they always return to it every night. 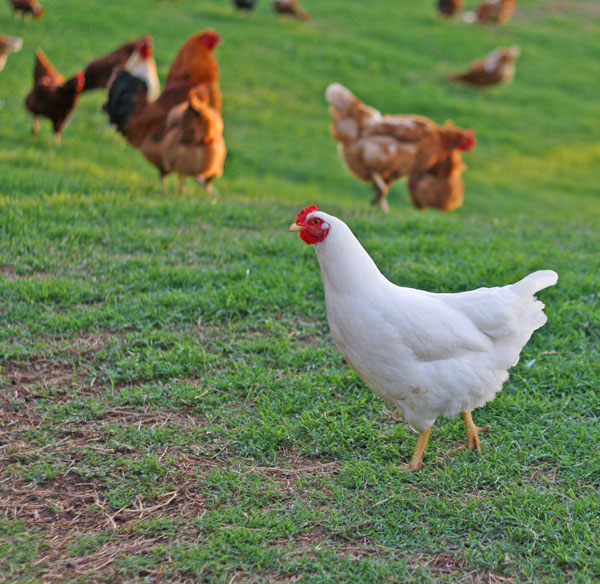 So, did you learn anything??  When I was a brand new chicken owner 16 years ago, I had no idea about a lot of these facts!  Plus, that was before pinterest and the internet was dial up and only used for emailing, so I really didn’t have many any researching options, either!

Add to my list!  What’s something about chickens that you didn’t know before owning them yourself??