5 Lessons Learned from 4H and the County Fair 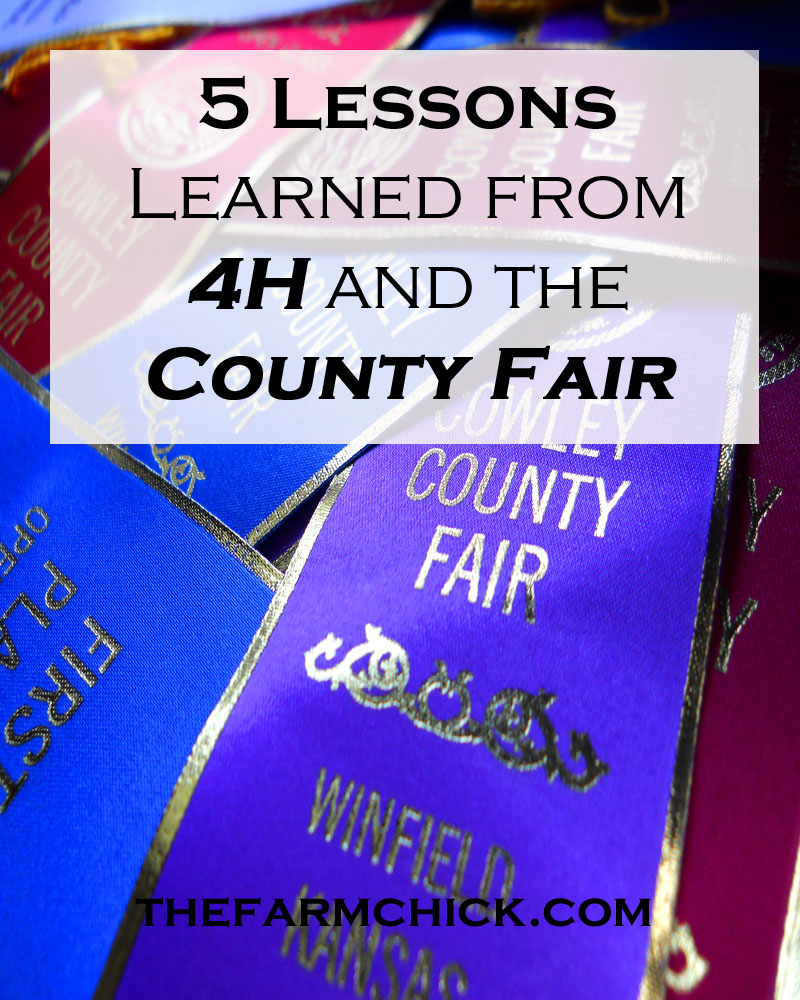 Our county fair has come and gone.  Lessons were learned, tears were shed, sleep was lost, awards were won, and fun was had.

I grew up always going to the Cowley County Fair.  I helped my grandma run the open class art department and always entered baking and art.  The carnival rides and grandstand events were a huge hit and, as I got older, I loved running around the fairgrounds with my friends.

When most people think of the county fair, usually 4H comes to mind.  Well, I was only in 4H for one year when I was 10, so the fair and 4H didn’t really sync together in my mind.

My kids, on the other hand, are extremely involved in 4H!  This was our 4th county fair as 4Hers and let me tell you, 4H at the fair is a whole different ball game!

But, the lessons my girls are learning are invaluable.  And I think they are lessons that are only unique to 4H and participating in the county fair.

Here are the lessons my girls learned this year at the county fair:

Lindy decided to do woodworking this year for the first time.  She and Jeff decided to make a saddle stand (Lindy needed one anyway).  Well, Jeff is a machinist and likes precision, so when it came to the construction portion, Lindy learned how to run a mill and make everything fit together tight and perfect.  She learned how to countersink screws and run a radial arm saw and everything.  I was in charge of the teaching her about the finish work.  So she learned to run my sander and how to stain and poly.  Here’s where the lesson comes in.  It took her and Jeff a couple weeks to get the stand put together and by the time my part came up, it was only 5 days before the fair.  After spending 2 1/2 sanding it, she decided it was good enough.  She put two coats of poly on and decided it was good enough.  I told her I thought she needed to sand more and that it needed 3 coats, but she informed me it was “good enough.”  Guess what happened when the judge looked at it.  When he awarded her a red ribbon (not a great ribbon in the 4H world), she bawled.  She had gotten docked because it wasn’t sanded enough and needed 3 coats of poly.  Well, after the initial disappointment wore off after a couple days, we talked about it.  That’s when she realized that “good enough” doesn’t translate into great and it will be awarded accordingly.

2  Listening to criticism and applying the advice given can make you a better (fill in the blank).

Last year, Lindy did photography for the first time.  Elisa and I are amateur photographers and thought her photos were really good.  Well, the judge that she got disagreed and judged her like she was a 10 year veteran photographer.  He was harsh!  Even I was a little appalled.  She took it hard (tears were shed) and vowed never to do photography again.  As the sting wore off, she decided to try it one more year.  But, she took to heart what that judge said and really tried to make her photography great.  Guess what…. she won grand champion in her age bracket 🙂

3 There may be people who are better than you at (fill in the blank) and that’s OK.

Elisa has been the reigning grand champion crocheter at the county fair for a couple years now.  She’s taken pride in that, but this year she got reserve champion instead.  But, you know what?  She saw that the grand champion winner had made a better product and that’s ok.  Sometimes you get beat, but it’s not the end of the world.  She also showed beef ( a market heifer) for the first time this year.  She knew her heifer (just a nice looking heifer from our regular herd) wasn’t exactly show quality.  Some people spend big bucks on expensive animals and consequently, they get the better awards.  But, she was fine with that.  You may not always be able to come out on top and there’s nothing wrong with that.

4 Sometimes having fun is more important than being the best.

Lindy showed goats for the second year.  Like Elisa’s heifer, we didn’t spend big money on show animals.  She didn’t win anything grand and she didn’t win anything in showmanship.  But, she had fun and that’s all she cared about 🙂  In our competitive society, that’s become somewhat of a lost art I think.

This is a lesson that I struggle with!  I have always stuck with doing things that are “safe” and that I’m pretty sure I would be good at without a lot of practice.  My girls, though, have shocked me in their willingness to try new things in 4H.  The one year that I was in 4H I did baking and sewing- 2 things I already knew how to do.  Lindy and Elisa, though, thrive on trying new and scary things!  Like showing livestock, for instance.  Neither Jeff nor I grew up showing (Jeff had a bucket calf once, but that hardly counts).  We’ve had to all step out of our comfort zone with this one, but the girls most of all.  And to get in that show ring and compete against kids who have been doing it forever and who had parents who did it forever, takes guts.  I wouldn’t have had the courage to do that.  I limited myself greatly in high school because I was too scared to compete against the experienced kids.  This ability to try new things no matter how scary they might look is a priceless skill that will serve them well as adults!

The girls have deemed the 2017 Cowley County Fair a huge success and they can’t wait to get started on next year’s projects.  I think I need a short break first, though 😉

Did you participate in 4H as a kid?  What lessons did you learn?