Wheat Harvest – The Best Time of the Year!

By: Melinda Donley
In: farming
With: 0 Comments 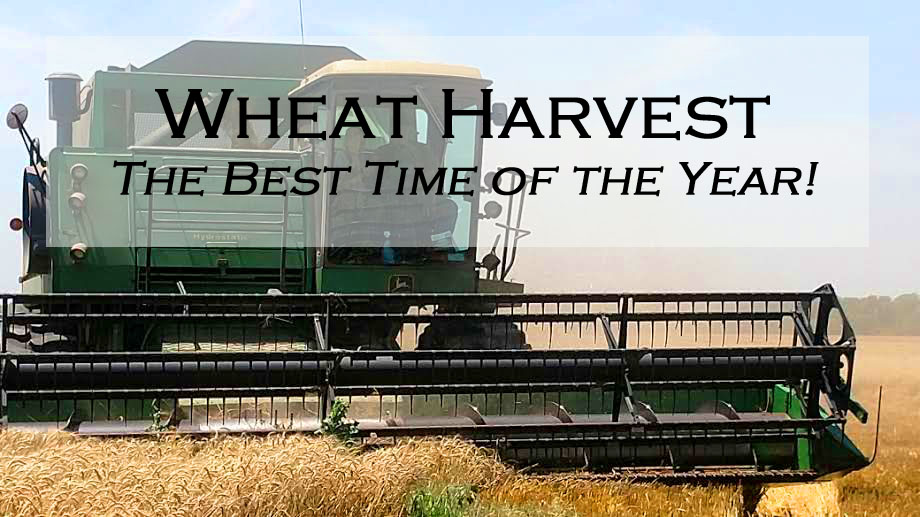 We are smack in the middle of wheat harvest right now!  (Update:  We finished last night before our area got a big storm!)  Hip-hip-hooray!  Seriously, I think wheat harvest is the absolute best time of the year and I feel so sorry for everyone that doesn’t get to experience it!

This year makes my 37th wheat harvest 🙂  We have two main harvests around these parts- wheat harvest and fall harvest.  Fall harvest starts in October and can run to almost Christmas and is long and drawn out.  Wheat harvest, on the other hand, starts mid-June and everyone is usually done by the first of July (although I do remember several 4th of Julys as a kid where we had to miss the town fireworks because we were cutting.)

In this area, we grow hard red winter wheat.  We plant it in October and it comes up, looking like green grass.  It stays dormant all winter (but still stays a pretty green) and then starts growing again in March.  This wheat is used for all that bread you see in the grocery store and any flour you might buy!  Did you know Kansas is the number 1 wheat producer in the United States?  So, if you eat bread (whether you buy it or bake it yourself), there’s a good chance some of the wheat used to make it came from a Kansas farm 🙂

As a kid, harvest was like another holiday!  We all looked forward to it and we’d fight to get the first combine ride.  We had two main elevators that we hauled to- one handed out glass bottles of pop (later switching to aluminum cans) and the other handed out bubble gum.  You could find us kids somewhere in the field or on the road to the elevator during harvest.  Mom pretty much let us go where we wanted and if we wanted to come home, then we had to hitch a ride from our uncle or grandpa (if we were hauling the wheat back to the bins at our house) or wait until supper when Mom brought food to the field.

I have so many harvest memories!  We would play in the grain in the back of a wheat truck, take naps in the combine, try to chew the wheat long enough to make gum (you had to chew for like an hour!), eat our share of raw wheat and come home dirty and scratched up from the wheat stubble!  It was hot, it was windy, it was dusty and it was so awesome!

As I got older and became a teenager, my role changed.  I still had a blast in the field, but I eventually graduated to truck driver and occasional combine driver.  We had converted semis (instead of pulling a trailer like you normally see with semis, my dad and uncle elongated the frame and put a grain bed on it).  The trucks all had quirks, which you learned very well after hours and hours of driving them 🙂  They also did not have air conditioning and there was no radio.

We often cut late into the night (think 2 am), which would result in 80- 90 hour work weeks for almost 2 weeks.  My sister, who was 13 when I started driving trucks, was given the glorious job of keeping me awake at night!  Guess who would nod off?  ….. you guessed it- my sister!  I enjoy a good prank and one night I dumped my water jug on her to wake her up.  It was totally worth it using up the last of my water to see her jolt awake with a scream 😉

There’s an adrenaline rush that comes with wheat harvest.  We have a small window to get it in and June is still prime time for thunderstorms around here.  I have many memories of being chased out of the field by a later afternoon storm.  The last thing you want is for the combine to get rained on because even if the combine bin has been emptied out, there is still wheat left in the crevices.  If you get water in there, you end up with a stinky, fermented mess!  (Ask me how I know 😉 )

One year, after driving trucks for a few days, they decided to put me in the tractor and have me start planting the double crop soybeans.  I was basically running behind the combine.  An afternoon thunderstorm popped up and everyone scrambled to get the equipment home.  My sister was riding with me and we were in the far end of the field (it happened to be one of the biggest fields we had!).  I was told to just keep planting until the rain came, so my sister and I are out there just planting away, watching the storm come closer and closer…. and then on the radio, they break in with a tornado warning!  A tornado had been spotted only a couple miles from our field and was headed our way!

There was no shelter and no way for us to get to any.  We discussed jumping in a nearby creek if things got dicey, but until that happened, we decided just to do what any self-respecting Kansas farmkid (who is accustomed to tornadoes!) might do… keep planting! Thankfully, it all disappeared as fast as it popped up.  It was a story we talked about for years, though 😉

My kids love wheat harvest as much as a I do.  Everybody get their first combine rides as babies.  My 10 year old niece got her first combine ride just a couple days ago… she thought it was extremely boring and she can’t figure out what all the hype is about.  Maybe you have to grow up with it?  You catch the excitement of the adults and it just stays with you?

During wheat harvest these days, my job is to run the combine occasionally, which I LOVE.  Yesterday, I started teaching Lindy (who is 11 years old) how to run it, so one day she can help. (Update:  After 3 days of operating it for several hours each day, she’s a pro and is about ready to solo!)  That’s one thing about farmkids- you start learning to drive large equipment, which would intimidate most adults, very early in life!

Once wheat harvest is over, it’s almost a let down.  On one hand, you’re relieved that the crop is in the bin (this means money for the farmer!), but after the adrenaline rush that keeps you going for a week or more, you kind of feel a crash and it’s rather sad that all of the excitement is over.

So, three cheers for the 2017 wheat harvest!!  And if you live anywhere near a field being cut, ask for a ride.  Most farmers are happy to explain all that they do and share the excitement of it all 🙂

Have you ever experienced a harvest season?  Does anyone else have a yearly “thing” that happens that you consider an unofficial holiday?

Follow Me
Latest posts by Melinda Donley (see all)
2017-06-19
Previous Post: Life on the Farm- Weekend Recap
Next Post: A CrossFit Review (Plus 5 Reasons Why I Work Out)